Photosynthesis is the process which powers life on Earth.  It takes the energy contained in sunlight, uses carbon dioxide, and generates chemical energy that is stored in form of sugars and similar compounds that fuel the activity of the biosphere, including us humans.  And just as any other Earth system process, in doing so it follows the laws of thermodynamics.  But does thermodynamics also restrict the efficiency by which photosynthesis can use sunlight?

This question has been addressed for several decades, always with similar outcomes: that somewhere between 12 and 18% of sunlight could be used by photosynthesis.  Observations, however, have repeatedly shown a different picture, finding efficiencies below 3% even in well watered and fertilized crops.  This seems to suggest that the answer is no, thermodynamics does not limit photosynthesis.

But, perhaps, this is not the right way to look at this question.  I just published a paper (online available on sciencedirect, preprint also available on ArXiv) with a different interpretation that quite likely yields a yes to the question.  The idea is this:  Photosynthesis does not just need light, it also needs resources, particularly water and carbon dioxide.  Vegetation takes up its CO2 from the surrounding air through stomata (small “valves” on leaf surfaces), and in doing so, plants lose water, which they take up from the soil.  Hence, the uptake of CO2 by photosynthesis during the day is strongly linked to water loss.  This is well known and established by a concept called water use efficiency, which describes how much carbon is gained for a given loss of water.  So if the rate by which water is lost to the atmosphere is limited by thermodynamics, the carbon uptake should be limited as well, imposing a limit to how photosynthetically active vegetation can be.  And in our previous works (e.g., here, here, and here) we showed that evaporation from the land surface, and turbulent fluxes in general, are strongly limited by thermodynamics, and can be predicted from the limit of maximum power.  So that’s the idea: Thermodynamics limits the efficiency of photosynthesis, or more precisely, the carbon uptake, but not directly in the conversion of sunlight into chemical energy, but by limiting the transport of resources needed to put the energy from sunlight into carbohydrates. 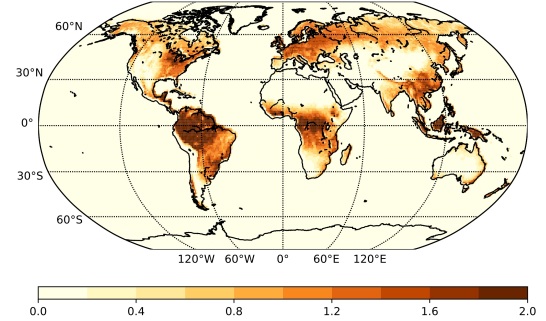 To demonstrate this idea, I used global datasets of radiation (CERES), hydrologic fluxes (GCPC for precipitation, GLEAM for evaporation), and carbon uptake by terrestrial ecosystems (CASA).  I first used the observation-based datasets to calculate the thermodynamic efficiency of terrestrial vegetation, yielding a median of 0.8% (so much less than the 3% referred to above), and demonstrated the close correlation between photosynthetic carbon uptake and transpiration (with a median water use efficiency of 2.1 grams of carbon taken up for each kilogram of water lost).  I then used absorbed solar radiation and downwelling terrestrial radiation and calculated the maximum power limit for turbulent fluxes, used precipitation as an additional constraint, and estimated evaporation rates.  These thermodynamically-limited rates reproduces the GLEAM evaporation rates very well (r^2 = 0.85), demonstrating that this exchange is indeed thermodynamically limited.  When I then apply the median water use efficiency to convert the evaporation rate back into carbon uptake, I get a map that reproduces the CASA predicted carbon uptake by terrestrial ecosystems quite well (r^2 = 0.56).  Obviously, this is not a perfect proof, after all, I needed to assume the value of the water use efficiency.  This value should come out of considerations of the exchange process at the canopy-atmosphere interface.  But it nevertheless demonstrates that this idea is very reasonable and consistent with much that is already known in the field. 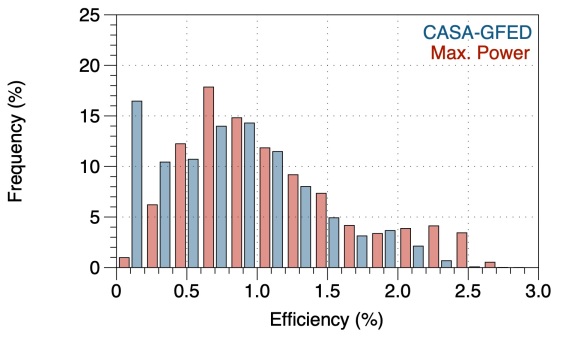 More generally, I think this has broader implications (which I describe more detailed in the paper).  It would mean that plants actually cannot do much about their low efficiency, because this low efficiency is imposed on them by the physical environment.  It sheds a different light about what a habitable environment is — life does not just need energy, it also needs an environment that sustains mass exchange.  So planetary habitability is probably more about an environment that can sustain high rates of mass exchange rather than the availability of light and comfortable temperatures.  And last, as someone who has done vegetation modelling in the past, this transport limitation is a process that no current vegetation model represents, so there is probably a lot more to learn, improve, and understand the biosphere.

I am a scientist working at the Max-Planck-Institute for Biogeochemistry in Jena, Germany. View all posts by Axel Kleidon